How has NOW impacted  my life? I don’t know that platform is the right word, but it’s given me the basis to live my life. To live out my values. To be an activist. To do things that made a difference…. 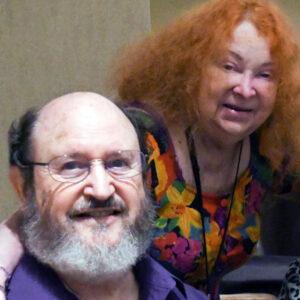 I’ve never really considered myself to be brave. To me, bravery meant putting yourself on the line, facing danger head on and sacrificing your well-being. But after the privilege of interviewing Skip Drumm and Alan Gross, my perception of bravery, what it truly means, is starting to change. Skip and Alan were both pioneers in the women’s rights movement in New Jersey during the ‘70s and ‘80s. They met in December of 1980 while working with NOW New Jersey, went on their first date in January of 1981, and have been together ever since.

When Skip and Alan came onto the call, I immediately knew I was going to enjoy their company. Alan was wearing a black shirt with pink writing that read: “This is what a feminist looks like.” Skip was wearing a blue shirt with the Superman logo captioned: “I’m a nasty woman.” I complimented them both on their shirts, even more motivated for the interview.
I heard so many amazing stories from Skip and Alan, but it would take too long to recount their numerous contributions to the women’s rights movement. There is one story, however, that is so inspiring that I need to share it.

It was January of 1991. There was a pro-life group in Dobbs Ferry, New York that was planning to conduct a series of blockades against abortion clinics. This pro-life group wasn’t your average pro-life group – they were much more radical. They believed that they should take any means necessary to stop abortions, including killing abortion doctors, clinic staff, or anyone else trying to facilitate an abortion. Skip, working with NOW, decided to go undercover to infiltrate this extremely dangerous group. Each day of the conference, she would listen to their speakers and ride the bus with them to abortion clinics. Every night, she would secretly call her contact at NOW and relay the group’s plans for the next day. Skip reflected, laughing, “What they couldn’t understand was how it was that every morning, when they arrived at a clinic to blockade it, already [NOW] people were there.” Skip said even though she was scared and worried about what they would do to her if they discovered who she was, she knew that she was making a huge impact.

Throughout this experience, Skip took notes in a diary, later formatted for online consumption. But it was not a diary documenting her undercover work; she didn’t write down the names of all the participants or discuss her plans to undermine the group. Because this task was so incredibly dangerous, Skip took notes in her diary in character. She praised the speakers, talked about making friends, and expressed disgust at the idea of abortion. Reading the diary is fascinating; you can understand how important it was to Skip’s safety for her to constantly be in character.

This is exactly what being brave is about. Risking your life for the greater good, taking a gamble to help others. But it is more than that – not only was Skip brave to undertake this task, but Alan was too. As someone who loved and cared for Skip, he supported her wholeheartedly, despite the enormous risks to her safety. He was worried for her every second that she was gone, but he was behind her, nonetheless.

Skip and Alan’s many incredible stories underscore that bravery comes in many forms. But above all, bravery is about taking risks for a better future, whether you are putting yourself on the line or lending your support to others. Skip and Alan are brave, and I hope I can emulate that bravery in my own life.

Lexi is a senior at Millburn High School. After taking a women’s studies class in school, she became more interested in the gender equality movement and joined Generation Ratify. Passionate about politics, she is taking her activism to the next level as Membership Director for the New Jersey High School Democrats and as campaign fellow for Tom Malinowski for Congress.

Skip Drumm joined NOW in 1974 after finding a brochure on a friend’s coffee table. Her husband had left her that morning. Alan Gross was inspired to join the movement through women at his job at Bell Labs. They met in 1981 and the women’s rights movement and NOW has been part of their story ever since. Both have been very active with the Somerset and Middlesex chapters and have served in many roles including Chapter President. Alan continues to manage the website and serve as Newsletter Editor for the chapter.

Any cookies that may not be particularly necessary for the website to function and is used specifically to collect user personal data via analytics, ads, other embedded contents are termed as non-necessary cookies. It is mandatory to procure user consent prior to running these cookies on your website.